An exhibition showcasing masterpieces of medieval art across a wide range of media, Of Earth and Heaven: Art from the Middle Ages took place at Luhring Augustine Gallery in New York, from 27 January to 10 March 2018. The accompanying publication, beautifully designed by Richard Ardagh Studio, draws on influences as diverse as pre-war monographs on German Renaissance sculpture, Modern British art reference books, Blackletter typefaces, letterpress printing, and the tradition of tipped-in image plates. It was shortlisted for the PrintWeek Awards 2018.

The centrepieces of the exhibition were three monumental sections of carved stonework from the south transept window of Canterbury Cathedral, one of the most important pilgrimage sites in Europe. The window was designed by Thomas Mapilton (d. 1438), a master mason who worked on Westminster Abbey and the Tower of London prior to his appointment at Canterbury. Made from limestone specially quarried at Caen in Normandy in 1428, Mapilton’s window was one of the most ambitious projects of English Gothic architecture in the whole of the medieval period, filling almost the entire height and width of the cathedral’s vast south transept.

The exhibition also featured a carefully selected group of paintings, sculptures, and goldsmith’s work that underscore Europe’s artistic flowering between the twelfth and early sixteenth centuries. Highlights included an extraordinary stained-glass window depicting the Creation of the World and the Expulsion of Adam and Eve from the Garden of Eden, painted in 1533 by the celebrated Renaissance glass-painter Valentin Bousch and now one of the centrepieces of the Hill Art Foundation. Among the smallest-scale objects presented were a precious 13th-century Limoges reliquary chasse, a silver arm reliquary made in Auxerre in the 1530s, and a pristinely preserved gilt-bronze corpus of Christ, cast by a master goldsmith in Cologne, in around 1180. 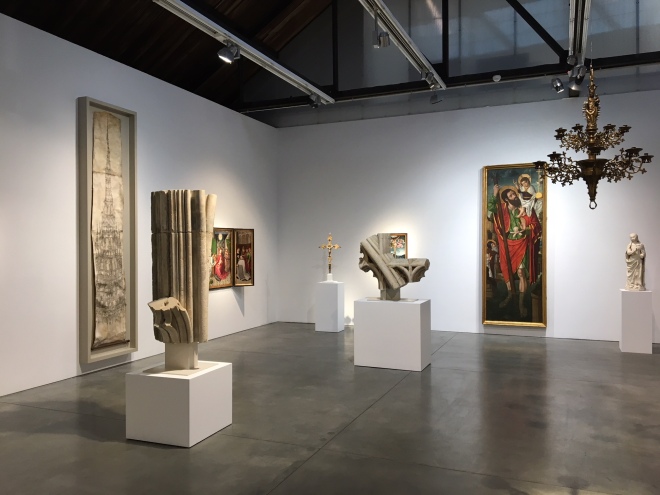 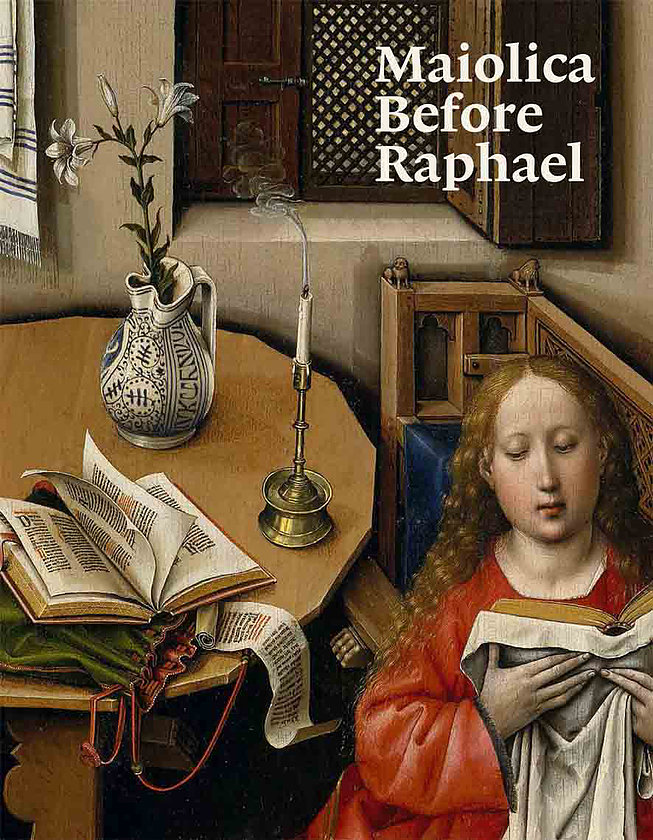 Published in conjunction with the exhibition ‘Maiolica before Raphael’ held at Sam Fogg between 8 May and 16 June 2017, this publication brings together an important group of late-medieval and early Renaissance ceramics made in Italy between around 1275 and 1500.

Later Renaissance istoriato, or narrative, maiolica, produced in the orbit of Raphael and other Italian artists, is widely known and has been extensively studied. But not for a hundred years has the same level of attention been focused on the magnificent works that preceded it in the fourteenth and fifteenth centuries, which were at times prized by contemporary patrons more highly than precious metals.

Maiolica before Raphael refocused the spotlight of contemporary scholarship onto the development of Italian maiolica from c. 1275 up until 1500, centring on the key period of development in the Quattrocento – the age of Donatello, Mantegna and Botticelli.

Presenting forty-three rare objects from the foremost centres of production that have survived in private hands, this catalogue explores the spread and evolution of the medium, as well as the history of collecting and the changing taste for Italian pre-Renaissance pottery in the modern era. Co-written with Elisa P. Sani and Justin Raccanello, with a preface by Timothy Wilson.

Many artists are drawn to images of death to express a process of reckoning with the impermanence of human life. Such expressions are visualised in a vast spectrum of ways, veering from the very concrete, blunt, or obvious (for me Hirst’s skull seems to grace this end of things no matter how much he likes to mystify his objects), to the metaphorical, the subtle allegory, or the palimpsest of history. Nothing speaks with a more searing combination of brevity and expansiveness than the ancient Moirai, or ”apportioners”, the three female figures who were said to spin, measure, and cut the thread of life between them; “To these powerful goddesses was assigned the imperative influence which governed all things on earth, and decided the lot of man.”[1]

The Moirai, or Three Fates, have been re-manifested in European history numerous times, evolving from Antiquity through Pagan and later Christian contexts, and into an increasingly secular, existential vein. Petrarch’s late Trionfi poems, in which the Fates feature as the third of six ‘triumphs’, offer a strongly rooted humanist point of contact with the cultural and societal questioning of death. The same removal from religious significances is expressed by visual art from the later Middle Ages, such as on a large-scale tapestry panel now in the Victoria & Albert Museum in London. Here the Three Fates appear in late fifteenth-century courtly dress comprised of richly brocaded fabrics gathered with golden chains and died leather belts, and they stand on the no-less-beautiful figure of Chastity lying across the lower registers of the panel against a background of mille-fleurs. At some point in its history, of course, the tapestry was removed from its original context, elided from its intended location and from the larger work from which it originates. Nevertheless this was courtly rather than spiritual art; It no longer relies purely on religious symbolism or ideology – the need to be a devout and goodly Christian – but instead communicates a religion of humanity, based on the desperate need to make each day count towards the enlightenment of our so-called civilisation, and the happiness of our closest relations, as we hang delicately from the fine thread of existence. The visual pun offered through a depiction of worked thread in the medium of a woven textile would also have injected the imagery of this tapestry in particular with incredible humour, of a type well-understood by elite medieval audiences. But, it plays too on the inevitable fate – and control? – of the tapestry weaver (as a representative of human craft more generally), that with the steady manifestation of the woven image their life and ours is being counted off. Time marked by the weaving process in this way ties the V&A tapestry (and others of its type) directly back to Penelope, sitting at her golden loom and structuring her denial of death in gilt thread.

Obsessively questioning, and acutely sensitive to pathetic fallacy, Francisco de Goya y Lucientes places his own version of the three demonic Fates in a human vortex, spinning over a burnt and barren landscape chillingly darkening before our eyes. His experience of their allegorical significance was both universal in its fear, and very private in its intended audience, communicable only to himself as he painted the figures a fresco across the walls of his own house. A tiny, globular manikin-like figure appears as if squeezed dangerously by the grip of Clotho (reminiscent perhaps of Fay Wray in the hands of the villainised Kong), not spinning but extracting the desperately short thread of life from its navel.

Scholars have found great difficulty interpreting this picture because of the unusual presence of a fourth figure at the very front of the floating group, with a face that bears no obvious relation to the Fates or their prey, Chastity. Interpreted by some as Prometheus, who was left bound on a mountain peak to be disgorged by eagles in recompense for stealing fire from Zeus, its overriding effect is one of tethered awkwardness, of writhing limb-locked captivity. We should be careful not to romanticise this figure, seemingly male within an otherwise all-female grouping, as a representation of Goya himself. Nevertheless, it may have manifested (to the artist’s introverted mindscape) a personal, human reality caught between the sisters as they run their haggard hands roughly over life.

In contemporary visual culture, artists diverse have utilised death (and Death) for both their medium and their message (it is pretty hackneyed to bring up Damien Hirst but he is ineloquently obsessed by the subject and is foremost in the public eye amongst his generation of artists). Yet often woven through their work are the shadows, revisions, or even wholesale reuse, of the elegiac figure types of the Three Fates, appropriated as they have been for millennia to cut at the quick of our limited time on the Earth.